The ULTRA is an adrenaline machine. At just 4 foot 2 inches, the reduced swing weight lets experienced riders to  push their limits. on the smallest, board available.

Ride higher and turn harder with our unique subsurface design 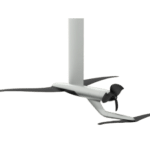 A key advantage of integrating the motor into the fuselage (instead of clamping the motor to the mast) is to provide a longer effective mast to ride higher without breaching.

This allows more extreme lean angles and powerful turns as well as giving more flexibility over swell or across choppy water. Size does count after all.

Don’t be fooled by the size of the motor; it’s made for performance. We use a reduction gearbox, which generates greater torque from a smaller, faster spinning mechanism. Our fuselage has the smallest diameter on the market (60mm) for greater hydrodynamic efficiency.

For the ride of your life

Optional footstraps connect you to the board and the ocean like never before. (Plus, they help our product testers land backflips.)Recommended upgrades:

The True Glide™ propeller lets riders fly to extremes with and without the use of the motor.

Boost performance by replacing the prop duct with the Pro Tail cover.

Flow and Race for Ultra rides 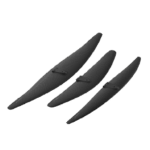 The new performance wings have been specifically developed for expert riders on Fliteboard Ultra and Pro. The Flow range comprises six wings designed for waves and hard carving, including wing breaches. Race has been designed for full-throttle riding at high speeds.

The Cruiser Range is all about stability. Larger wings allow for earlier foiling at slower speeds. Advanced riders can take advantage of the extra glide to ride swells without the use of the motor.

The  most popular all-purpose wing. Every new Fliteboarder should have one. Takes off early and offers an impressive speed range and efficiency.

The largest and most stable wing used at Fliteschools around the world. Suits beginners, heavier riders and those wanting a more docile ride. Early take-off and slow to medium cruising.

These high aspect wings are loose and manoeuvrable. Ride waves, or ride rivers like a wave.

The ultimate wing for power-off wave gliding with our True Glide prop. Flow 1300 takes off early and just glides. Despite it’s large size (one metre span) it’s agile and responsive.

This wing lets you ride slow and throw your Fliteboard around in wild turns, and catch waves.

This super-snappy wing is at a size that allows slow speed riding, but still with the ability to push hard.

A wild wing that is the loosest of them all. For the most responsive ride possible at medium to fast speeds.

These wings come to life at higher speed. Perfect for controlled carving. Just like snowboarding without the frostbite.

A very popular wing that offers high speeds and more responsiveness. The go-to wing for intermediate and advanced riders looking to carve hard and push their top speed.

The name says it all. If fast carves and top speed is your thing, this 50km/h wing is for you. Performs best in Pro Mode with the prop duct removed.

Our largest, most stable stabiliser wing. Designed to accompany the Cruiser 1800 Wing, but can also work with the Cruiser 1100 wing for increased pitch stability.

Designed to be paired with the Flow wing range.

Designed for high speed use with the Race and Flyer wings.

We use cookies on our website to give you the most relevant experience by remembering your preferences and repeat visits. By clicking “Accept”, you consent to the use of ALL the cookies.
Cookie settingsACCEPT
Manage consent

This website uses cookies to improve your experience while you navigate through the website. Out of these, the cookies that are categorized as necessary are stored on your browser as they are essential for the working of basic functionalities of the website. We also use third-party cookies that help us analyze and understand how you use this website. These cookies will be stored in your browser only with your consent. You also have the option to opt-out of these cookies. But opting out of some of these cookies may affect your browsing experience.
Necessary Always Enabled
Necessary cookies are absolutely essential for the website to function properly. These cookies ensure basic functionalities and security features of the website, anonymously.
Functional
Functional cookies help to perform certain functionalities like sharing the content of the website on social media platforms, collect feedbacks, and other third-party features.
Performance
Performance cookies are used to understand and analyze the key performance indexes of the website which helps in delivering a better user experience for the visitors.
Analytics
Analytical cookies are used to understand how visitors interact with the website. These cookies help provide information on metrics the number of visitors, bounce rate, traffic source, etc.
Advertisement
Advertisement cookies are used to provide visitors with relevant ads and marketing campaigns. These cookies track visitors across websites and collect information to provide customized ads.
Others
Other uncategorized cookies are those that are being analyzed and have not been classified into a category as yet.
SAVE & ACCEPT
0
Your Cart
Your cart is emptyReturn to Shop
Continue Shopping